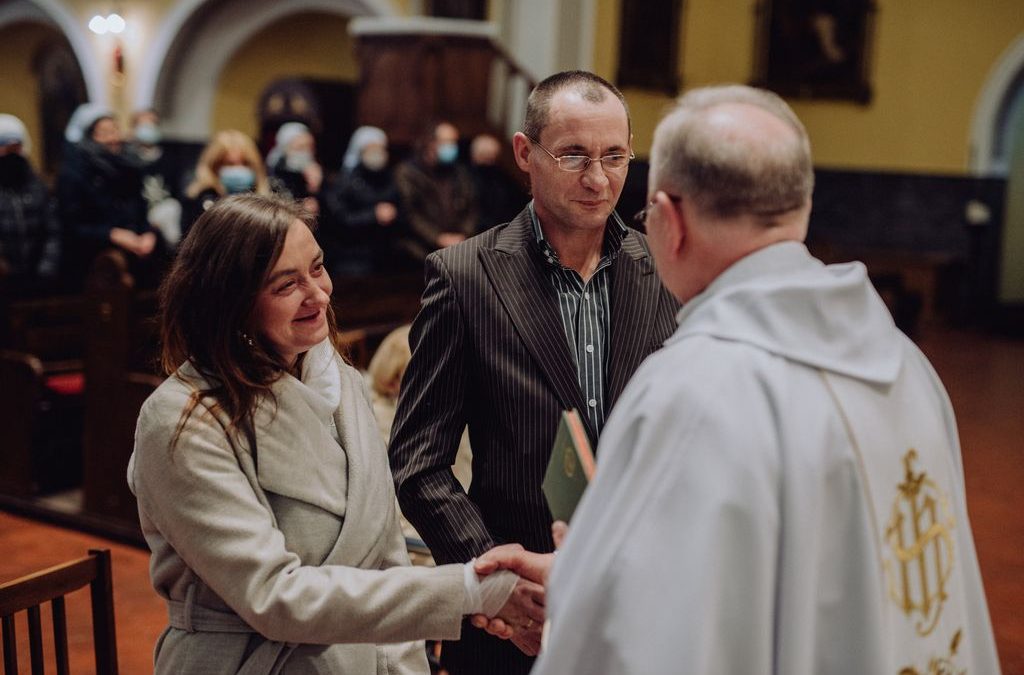 A grant from the Fund supports the Polish Relief Service of the Order of Malta in their work with the homeless. This recent update captures a special moment for two homeless couples living in Katowice.

It took the Capuchin brothers and the Sisters of Mercy a few months to get the two couples spiritually ready to get married. The wedding ceremony took place on 28 December 2020 in Katowice, Poland. For their honeymoon the newly married couples were invited for a one night stay at a five star hotel.

“I got to know Monika and Irek and also Kasia and Mariusz a few months ago, just by accident. They live in dramatic conditions” says Jacek Gorzelec, an extraordinary minister of holy communion at St. Anthony’s parish in Dąbrówka Mała, who has been supporting the couples for more than 2 years.

Jacek Gorzelec reports the homeless were initially supported with warm sleeping bags and some food. Later, he managed to invite some of his friends and donors to join him in helping them. “For the wedding we were even able to provide wedding rings. We want to give the newly married hope, give them a helping hand, and help wisely” he emphasised.

“We got to know about the wedding from the Sisters of Mercy just few days before the Christmas” says Marek Grzymowski, a member of the board at Pomoc Maltańśka – Maltańska Służba Medyczna Foundation. “Our volunteers eagerly joined the event and helped to organise it. There were beautiful songs in the church performed by our cadets, wedding cake and presents. Mr Jerzy Donimirski, a hotelier and a member of the Order of Malta invited the couples to his five-star hotel in Cracow. We hope this is just a beginning of a new path leading to exit homelessness” Marek Grzymowski adds.

Starting at the beginning of the new year Monika, Irek, Kasia and Mariusz will take part in a special pilot project for the homeless. They are going to get a temporary flat and a job. Moreover they will take part in meetings with an employment counsellor and a psychologist. All activities aiming at starting a new life in society.

The Order of Malta Poland for 20 years has been supporting the Sisters of Mercy in Katowice.  During the pandemic the need for support amongst the poor is even bigger. The sisters provide around 200 dishes per day for the homeless. They also provide medical aid and help deal with administrative matters. Recently the volunteers of the Order of Malta joined the Sisters in visiting the homeless at their places of stay.

Since the beginning of the pandemic Pomoc Maltańska – Maltańska Służba Medyczna Foundation, thanks the Global Fund for Forgotten People, has donated two oven stoves, around 800 bandages, three sanitising stations and almost a ton of food items. The volunteers and cadets support the Sisters in shopping and logistic matters. We would like to express our thanks to the Global Found for Forgotten People for helping us support the homeless and the forgotten.