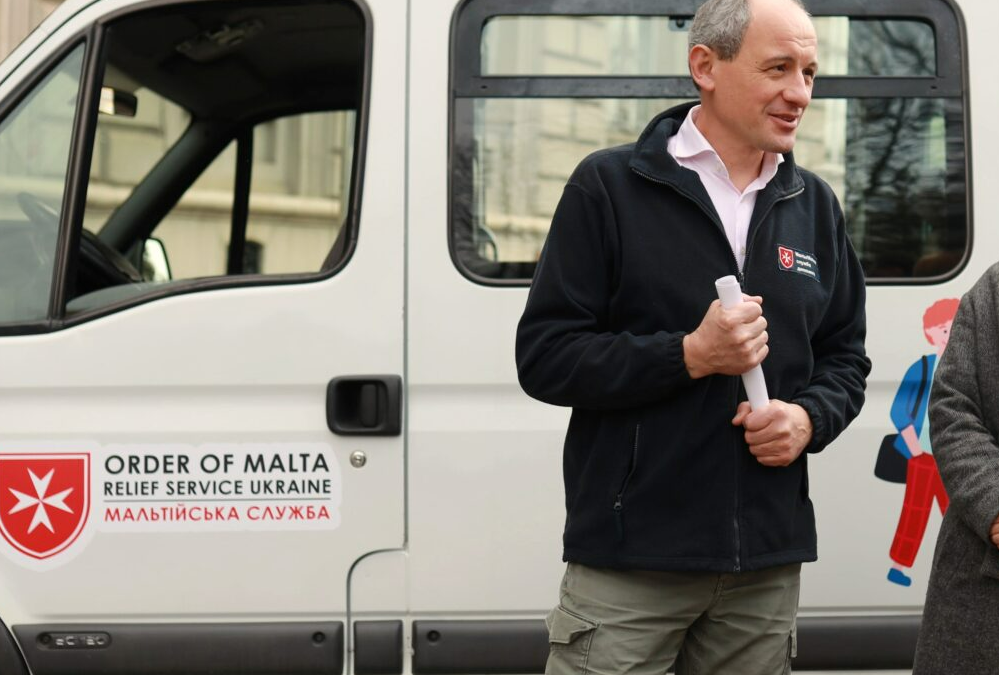 Pavlo Titko, has been working and volunteering for the Ukrainian Relief Service of the Order of Malta since 1993. He now holds the position of Director and has been heavily involved in the humanitarian response to the war. We spoke to him about his work with the Order of Malta in Ukraine. We covered everything from the challenges of war in winter, to how they are maintaining their existing works with the vulnerable and the power of an international network.

How long have you been involved with the Order of Malta in Ukraine?

The Order of Malta started work in Ukraine in Lviv in December 1990 as part of the winter humanitarian aid from Germany. We started with a field kitchen and that’s when I joined the team – I had just graduated from university and helped with German translation. In February 1993, the Ukrainian Relief Service, a charitable organization was established and registered in Lviv. Almost simultaneously, branches were founded in Ivano-Frankivsk, later in Berehovo in Transcarpathia and in Kyiv. In 2013, the branches merged into the Ukrainian Relief Service.

Since the war started, Ukraine has been a focus for so much international relief effort from the Order around the world. How does it feel to be part of an international network?

Thanks to the international network of the Order of Malta and international support, we are able to help people efficiently. Being in this international community, we have the opportunity to explain the war and the situation in Ukraine to the world as well as attracting tremendous support for Ukraine. We are in constant coordination and cooperation with Malteser International, Malteser Hilfsdienst and other Order entities across Europe. Importantly, the organisations of the Order understand the pain this crisis is causing, the scale of the disaster and are ready to support us.

What are your greatest challenges moving into winter? Where do you anticipate the biggest needs?  It has been ten months since full-scale war started in

Ukraine. Today, Ukraine is preparing for a winter that will be very hard. Due to the shelling of power plants, 50% of the energy system has been damaged, leaving ten million Ukrainians without electricity. Now, in addition to danger from air raids and shelling, electricity blackouts, lack of communication and disruption of heating have been added to the everyday life of Ukrainians. The biggest need in Ukraine now is energy supply, namely providing backup sources of electricity. To this end, we have launched a programme restoring destroyed houses; sealing windows and replacing them, patching roofs and so on. We are delivering generators to the frontline areas for critical infrastructure facilities, and soon we will send out family winter kits, which include sleeping bags, thermoses, warm socks, power banks, flashlights and dry food that does not require cooking.

The Ukrainian Relief Service has taken on a huge amount of humanitarian response work and care for displaced people on top of maintaining your existing assistance to vulnerable groups. How are you managing to balance this?

On February 24th, our team gathered in the office in the morning and launched a large-scale campaign to help Ukraine. Every day the Ukrainian Relief Service sends trucks with humanitarian aid to the East and South of Ukraine. We provide shelters for internally displaced people (IDPs). Our shelters host more than 700 IDPs, who have sought refuge with us over the last ten months. Two hundred shelters receive humanitarian aid from us and recently we started major repairs of the building in Lviv to create a shelter for more than 100 IDPs. In summer, we opened a prosthetics workshop for people who lost their limbs due to the war. We have a large team of psychologists providing psychological assistance in shelters for IDPs and to the wounded in hospitals. We are also engaged in integration activities; organising excursions to Lviv region for IDPs and camps for displaced children. In addition, we continue the pre-war activities of our work with the homeless, disadvantaged children, lonely elderly people, people with disabilities, as well as first aid training. This year, like every year, we ran the 27th “St Nicholas visits the children” campaign. At the beginning of the war, the difficulty was not to scatter. Everyone needed help, but it was important to outline a clear direction of our activities to make it effective. Another challenge for us was to protect our key areas of work, as listed above. Since February 24th, we have significantly scaled up our activities and the workload has increased a lot. Today we are able to do all this thanks to the team and its growth, as well as the constant support of our partners.

With such a challenging and changing situation we know it is difficult to plan ahead, but where do you think the greatest long-term need will be in Ukraine?

Yes, you are right, everything is very dynamic in Ukraine today. Sometimes the situation can change very rapidly, several times a day. This requires great flexibility in solving problems. Undoubtedly, the long-term need will be to support IDPs. Currently, there are almost seven million IDPs in Ukraine, and their number is only increasing. Of course, some hope to return to their homes, while others know their houses or apartments have been lost forever. In the conditions of war it is extremely difficult to calculate the exact number of destroyed and uninhabitable housing but we think 2.4 million people have been left homeless. These people need help not only with housing and work, they will need long-term psychological support. There will also be a need for integration measures for people to make a comfortable life in new communities.

The Fund has worked with you for ten years with various groups in need. Which of these stood out to you the most?

The Fund has supported a variety of projects from hot lunches for elderly people, to helping children with disabilities in integration and development and first aid training. However, what comes to mind from the bright examples of our cooperation is, unfortunately, a sad example. Thanks to the Fund, we created a workshop in Mariupol with modern equipment so that children with disabilities and children from disadvantaged families could develop and acquire new skills. The growth and development of confidence and skills in these children was undeniable. Unfortunately, this workshop was completely destroyed since the start of the war. Thankfully, our colleagues and volunteers survived and managed to get out of the city in time.

We hope to continue our partnership for many years to come. How has the Fund played a role in the development of your projects with the Forgotten?

The Global Fund for Forgotten People has always supported us where we needed it. The Fund has a great understanding of our needs and we have established close and effective cooperation. The last decade has demonstrated an example of quality and valuable collaboration. Each project helps us become better, we grow, develop and learn. Our guests feel supported and believe that they are not alone with their problems. Here in Ukraine, the Ukrainian Relief Service, thanks to its consistent work, has a strong reputation, the trust of the community and the trust of the state. This was possible thanks to your support. It is because of this, elderly people who do not have relatives, people who do not have housing, and people with disabilities have the opportunity to continue a decent life. We have many problems ahead that will require assistance in solving. Ukraine will have to recover from the war for a long time and will need the support of our foreign partners. We look forward to a long-term cooperation so that no one in Ukraine is forgotten.