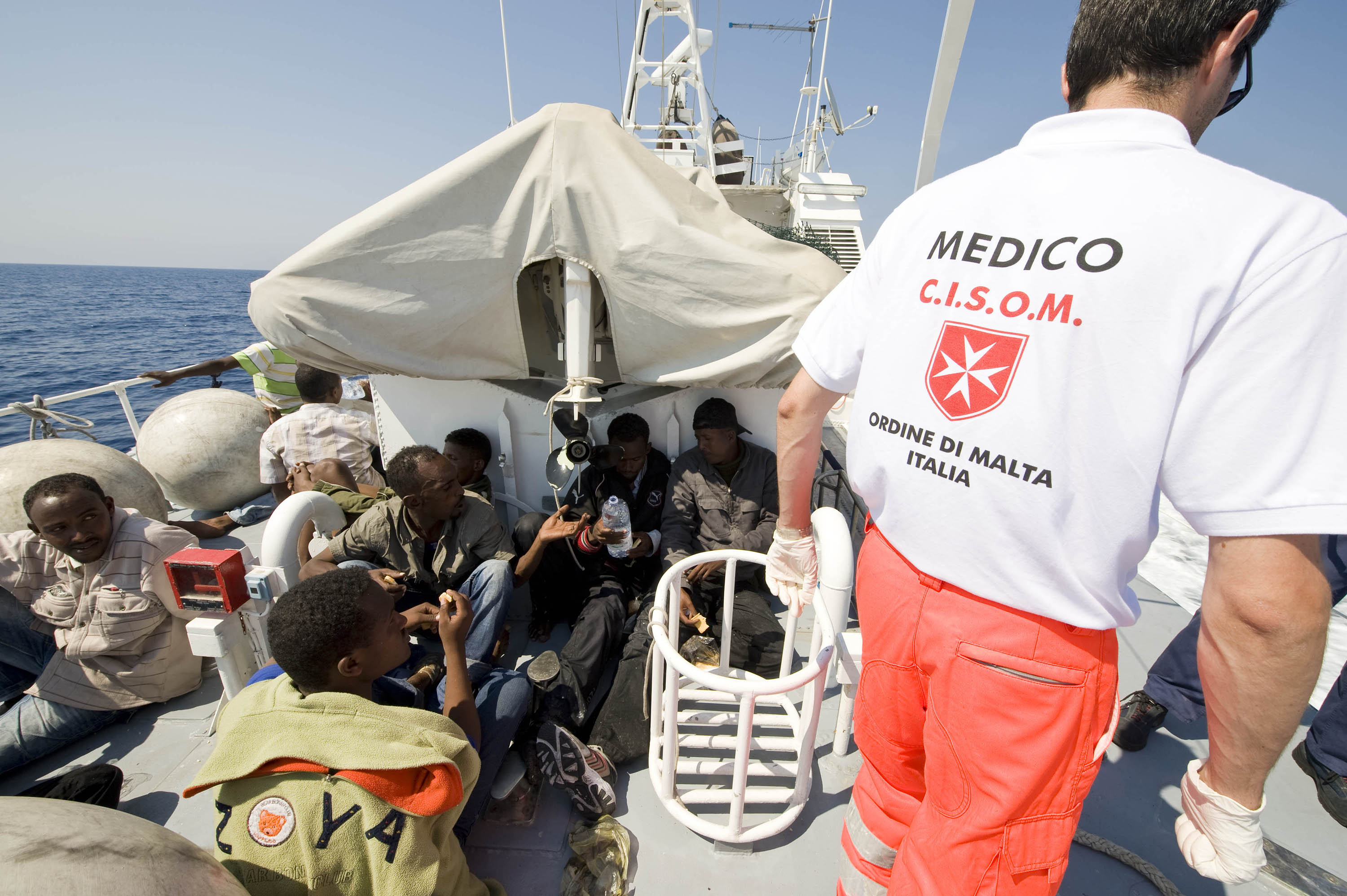 The number of refugees and displaced persons worldwide has reached levels not recorded since the end of World War II.

Present in 120 countries with 80,000 volunteers, 33 Rescue Corps, a worldwide relief agency – Malteser International, 57 Priories and national Associations and an established diplomatic network with over 100 countries, the Sovereign Order of Malta is on the front line offering assistance to refugees and displaced people, both in the countries involved in the conflicts and in the final destinations of asylum seekers.

The Grand Chancellor of the Order of Malta, H.E. Albrecht Freiherr von Boeselager:

“We are present in some countries of origin like Iraq, Lebanon and when possible through mobile clinics in Syria, as well as some African countries. We also have a presence on Italian coast guard ships providing medical services. In Germany we run reception centres and last year, more than 50% of the 200,000 asylum seekers in Germany went through our facilities where they spent their first ten days to two weeks. In France we offer legal advice to refugees and asylum seekers and in Hungary we provide first aid services”.

“We have to decide on several practical steps and must be aware that we will be faced with the influx of migrants for the foreseeable future. From the perspective of the order, the first problem is language perception. We should never talk about illegal people. Nobody is illegal, we were all created by God and live equally. The difference is in the status to stay within a country. We have to deal with these people with dignity”.

“With the crisis in the Middle East it has become more important for organisations based on Christian faith and the Muslim community join forces to counter terrorism and also to deal with the human tragedy. We have initiated a number of efforts where, for example, in Lebanon the Order runs ten clinics, five of which are run in close cooperation with members from different religions, such as Sunnis, Shiites and those of Jewish faith. We even have a clinic in the South where Shiite nurses wear our cross. In preparation for the World Humanitarian Summit next year, we organised a symposium in Geneva with the title ‘Faith based Organisations, together for Humanitarian Action’. Where we spoke about special services and the added value of faith based organisations in crises. We held it together with Muslims, Hindus, Buddhists. We believe that such organisations are better placed to link with the religious infrastructure of countries and organise support, while having better access to information as to how to implement such aid”.

“The Syrian crisis has become one of the worst humanitarian disasters of our time. 16 million people in the region are in urgent need of humanitarian assistance,” says Oliver Hochedez, Malteser International’s emergency relief coordinator. “Medical infrastructure and health care in Syria have nearly collapsed, and the neighbouring countries, where hundreds of thousands of Syrians have fled, are close to the limit of their capacity. Humanitarian aid workers within Syria face the most difficult, dangerous conditions.”

The displacement process of Syrian refugees to Lebanon started with the beginning of the Syrian crisis in March 2011. According to the UNHCR, the official number of registered Syrian refugees in Lebanon had reached more than 1.5 million people by the end of 2014, representing the third of the national population.

The Order of Malta Lebanon has been attending to Syrian Refugees since August 2011, by:

The Lebanese Association of the Order of Malta

In the year or so since the mass exodus of Iraqis from Mosul and the Sinjar Mountains, more than three million people in Iraq have fled from the so-called ‘Islamic State’ terror group. The United Nations estimate that a further 1.7 million will be added to this number before the end of the year. Malteser International, the Worldwide Relief Agency of the Order of Malta, is therefore planning to expand its mobile medical aid in the country. The Order is providing around 800 families with clean drinking water in cooperation with the Danish Refugee Council.

The Order has been working in northern Iraq since August 2014, in cooperation with its local partners has provided medical treatment to around 45,000 sick, wounded and displaced people, as well as distributed emergency aid and hygiene kits with essential aid supplies to almost 10,000 people.

In 2014, approximately 207,000 refugees and migrants sailed across the Mediterranean to reach Europe. UNHCR estimated that 3,419 of them drowned while making the journey – an average of almost 10 people every day. Most of those who made it to Europe were rescued by the Italian Navy, Coast Guard or merchant ships.

From 1 January to 31 July of this year, 81,408 hours have been spent at sea with the dedication of those conscious of their duty to help their fellow creatures. 124 men and women have worked shifts in all weather conditions, facing miles and miles of sea day and night, to assist those who have faced a much more difficult journey. 29,889 migrants have been given first aid and taken to safety on Italian search and rescue vessels.

Italian Relief Corps of the Order of Malta (CISOM)

Since September 2014, Ordre de Malte France has been supporting Iraqis who have sought refuge in France. 155 asylum seekers – 62 children among them – benefit from this help across five départements. Teams from the Order of Malta in France make visits to refugee families to distribute food and hygiene kits. To facilitate their integration into society and help them to start a new life in France, migrants are given help to find jobs and homes, supplied with French language and culture courses, and given support in judicial and administrative proceedings to help them to gain legal protection as refugees.

Ordre de Malte France is also defending the rights of other migrants in three administrative detention centers, where legal advisers provide daily assistance to detained foreigners who are due to be expelled. This task primarily consists of giving legal counselling: informing detainees of their rights and the course of proceedings, legal assistance: preparing a defense, drafting appeals, submitting applications and complaints; and Human Rights monitoring and reporting. If and when migrants are released, they are given help with orientation during their return to the outside world. In 2014, the French Order of Malta helped 213 detained foreigners seeking asylum in detention centers. Most of them were from Afghanistan, Pakistan, Kosovo, Georgia, Guinea, Congo and North Africa.

Since 1989, about one million refugees from 75 countries have were given a place to stay by the Order of Malta’s organizations in Germany. Many of them were also helped to find jobs, homes and deal with administrative procedures. Migrants without health insurance can receive medical care at some of the Order of Malta’s medical facilities. Since 2001, more than 90,000 sick migrant people have been treated, and given birth to around 1,500 children at Order of Malta medical institutions in Germany.

In 2014, 50,000 refugees were given shelter by the Order of Malta in Germany, while around 150 asylum seekers per day received help while they moved into a first house of their own: their first step towards a fully independent and socially integrated life in Germany.

The German Association of the Order of Malta

Over 32,000 people fleeing conflict, violence and poverty have requested asylum in Hungary in the first quarter of this year, the second highest number of applicants in the European Union after Germany in this period of time.

The Hungarian Charity Service of the Order of Malta has launched an emergency medical and relief programme to address the plight of refugees in three major cities across the country.

At the Eastern Railway Station in Budapest medics and social workers operate a mobile clinic, treating 52 people for injuries and illnesses in the first week of operation and distributing food, water and clothes, with the number of recipients quickly doubling as the daily service becomes better known.

In addition to running a daily mobile clinic, the Order of Malta in Hungary is working in Szeged with the civic agency to patrol the surrounding woodlands, distributing water and food. Between 20-30% of the 150 people assisted in the first week are children from newborns to 6 years old.

In these early days of the project, the Order of Malta’s Hungarian Charity Service is gathering information and evaluating progress made so far to develop further recommendations. In response to the current humanitarian crisis the service is ready to intervene to wherever the need is greatest.

Burgenland, Switzerland-yesterday: in the course of the day thousands of people walk the Austrian border. In cooperation with many other organisations the Order of Malta in Austria provides emergency aid on the border.

In Tyrol the Order has taken over the medical care of more than 300 refugees housed in a tennis hall, and in the areas of Salzburg, Vienna and Burgenland the Maltese Hospital Service are fully stretched.

The Order in Austria also spends each day with local medical teams (Red Cross, Samaritans, St John, and professional rescue Vienna MA 70), to provide protection to asylum seekers, as well as medical care and night quarters at the Vienna Westbahnhof. On Sunday night, assistance was given to more than 1,000 refugees.

Order of Malta in Austria

Thousands of members of the Muslim Rohingya minority from Myanmar, as well as people fleeing from poverty in Bangladesh, have attempted to flee by sea to Indonesia, Malaysia and Thailand. A great number of those have found themselves in distress at sea in dangerously overcrowded boats, often for weeks. According to estimates by the United Nations, over 120,000 Rohingyas fled from religious persecution in Myanmar in the last three years alone. During the first three months of this year, at least 25,000 sought refuge by heading for South-East Asia.

In Banda Aceh in Indonesia, the Order of Malta, through Malteser International is providing 433 refugees in a small camp with hygiene kits, mosquito nets, feminine hygiene articles, as well as special food for children, pregnant women and breastfeeding mothers. In Maungdaw, Myanmar, the Order of Malta is also providing emergency medical relief at a camp containing 228 refugees, mostly from Bangladesh.

With particular thanks to: