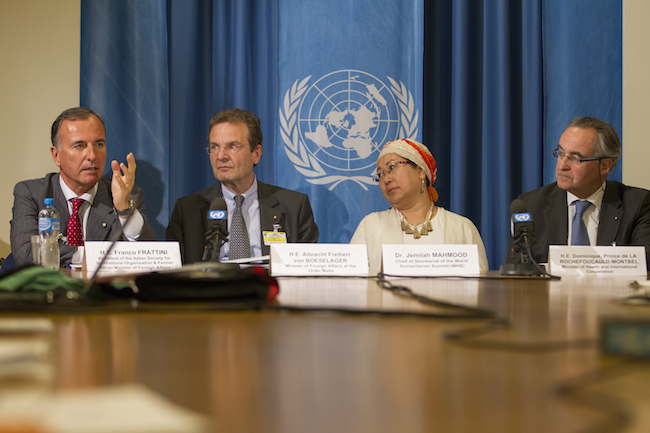 In Geneva this May, representatives of four different faiths – Christianity, Islam, Judaism and Vedantism – as well as experts and diplomatic representatives, leaders of secular and faith-based humanitarian organisations met in the United Nations for the ‘Religions Together for Humanitarian Action’ symposium organised by the Sovereign Order of Malta.

The violent conflicts underway in many areas of the world have reached unprecedented heights, with an ever-growing number of victims – most of whom are civilians. At the same time we are witnessing a progressive deterioration in the application of international humanitarian law. In this context, religion is often considered the cause of wars. But the reality is much more complex, as the Sovereign Order of Malta’s Grand Chancellor, Albrecht Boeselager, explained in his opening speech: “It is my firm conviction that religious motivations can induce violence when separated from moral context and poisoned by corruption and thirst for power. Conflicts may contain religious elements but they are always driven by cultural, economic, ethnic and territorial factors and often by external pressures”.

To seek a basis of shared values, to create a code of conduct applicable to all institutions and organisations engaged in humanitarian aid, to reach local communities by investing in infrastructure and assistance networks already present in the territories involved in conflicts, not to mention promoting the values of humanitarian bodies to combat prejudices of both people and governments. These were some of the proposals emerging from the debate, consisting of two panels, each with five speakers. Panellists included Jemilah Mahmood, Chief of the World Humanitarian Summit Secretariat, the initiative launched by United Nations Secretary General, Ban Ki-moon. The Order of Malta’s symposium was held in the build up to the World Humanitarian Summit, scheduled for May 2016 in Istanbul with the purpose of updating humanitarian aid practices.

In his concluding speech, the Sovereign Order of Malta’s Grand Hospitaller Dominique de La Rochefoucauld-Montbel recalled the imperative to reassert firmly “the humanitarian principles the international community ratified after World War II in full respect of local traditions and cultures”. The Grand Hospitaller encouraged dialogue and cooperation among the different faiths, a theme that ran throughout the debate, enriched also by an invaluable testimony from the Order of Malta’s Lebanese Association. For over two decades it has been running humanitarian aid programmes in this country in partnership with the Shia, Sunni and Druze communities.

The symposium – organised thanks to the work of the Sovereign Order of Malta’s Mission to the UN Geneva – will produce a document with the guidelines and recommendations emerging from the debate that will be presented during the World Humanitarian Summit in Istanbul next year.