Faces of the Fund: Interview with H.E. Franz Salm-Reifferscheidt 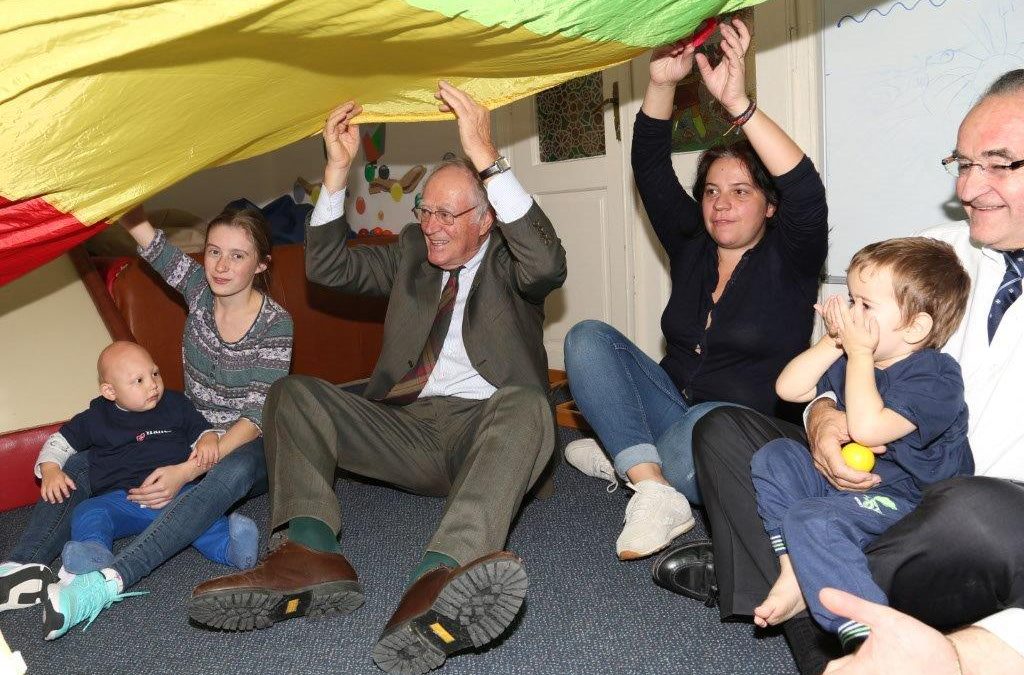 The Roma people are the largest ethnic minority in Europe. Many face discrimination on a daily basis, making it hard to complete a basic education and find work. The Order of Malta runs holistic support programmes across Europe to break this cycle of segregation and poverty. We spoke with H.E. Franz Salm-Reifferscheidt, the Order’s Ambassador at Large for the Roma People, about the impact of the Order’s work and the opening of a new education centre for Roma children in Ukraine.

How did you become involved with the Order of Malta?

I have been a member of the Order since I was 26 – fifty years ago! When I retired, I wanted to use the time I had to do more for the Order in a role which combined the equally vital diplomatic and social elements of the Order’s work. This is very true of my role as the Order’s Ambassador to the Roma People, as the problems faced by Roma communities are not only social, but also political. There are whole towns in eastern Slovakia where almost all the residents are Roma, because everybody else who has lived there has left to work in the larger cities. The Roma community are the largest minority in Europe, and the question of how to help them is a highly political one.

What problems do Roma communities in Europe face?

The Roma community have suffered a huge loss of livelihood in recent decades. Many of the skills they relied upon while travelling – working farmland with horses, providing repairs – are no longer in high demand. Social segregation and stigmatism can also mean that Roma men are the first to lost their jobs when factories close. A lack of education limits the careers which they can then enter. As a result, these communities become poorer and poorer, living in unbelievably bad conditions. Apathy sets in, and many can turn to begging and crime. It is very difficult for them to integrate with the rest of society when they lack experience of responsibilities like having a regular job or paying taxes.

What is your approach to supporting these communities?

It has always seemed to me that there are seven points that must be addressed in a programme that hopes to support and integrate Roma people. It must teach good hygiene and offer sanitary facilities. It must provide mobile medical care, as these communities often carry a mistrust of hospitals. It needs to include a kindergarten with a playground, tutoring to support children who are at school, and apprentices in jobs which are in demand in the local area. Mothers, many of whom are extremely young, must be given counselling and support. And finally, there must be an element which gives space to celebrate and practice Roma music and culture. This final point is especially important: integration is not assimilation, and it is important that communities can keep their culture alive. All of the Order’s programmes with Roma people encompass most, if not all, of these points, which allows them to offer holistic support and make real change.

What does successful change mean to you?

We consistently hear the same feedback from the teachers of children involved in our programmes. After six to twelve months of participation, teachers begin to comment on children’s increased self-esteem, how cleanly they present themselves, and how much better they are performing in the classroom. Generally, the children we work with are so eager to learn and grateful for the opportunities the programme gives them. We recently expanded one of our programmes in Romania because parents of local non-Roma children were noticing that the children involved in the project were suddenly doing better than their own children at school! Having some non-Roma children involved in the project is really important for integration, as the different groups learn about each other and form friendships. But the signs of lasting change come later, when a young person attends university or finds permanent employment. These are the indications that they have finally left a life of segregation behind them.

How has the Fund been able to support your work?

I think the Fund is a very important part of the work of the Order, as its support isn’t limited to just one location. Wherever there are relief organisations – Africa, Eastern Europe, South America – they are able to come to the Fund and ask for a grant to support their work. I heard about the Fund soon after I was appointed as Ambassador to the Roma People, and am grateful for the many grants I have received over the years for projects working with Roma communities around Europe.

Are there any projects you have visited that are particularly meaningful to you?

Our biggest project is in Valea Crisului in Romania. I visited the settlement just a few months after I was appointed Ambassador, with Count and Countess Kalnoky. The conditions were terrible there, dirt and rubbish everywhere, with no running water, electricity or even windows. Count Kalnoky suggested offering riding classes as a way to teach discipline and concentration, which are both vital to helping children succeed at school. Children from the settlement excelled on horseback, as well as in the additional weaving, pottery and carpentry classes that the programme offered – and soon the results began to show. Within a few years, the local school that the children attended had moved from being the worst in the district to the upper-middle rankings. None of the children from the programme repeated a single class. Another fantastic programme is the Máltai Szimfónia, or ‘Maltese Symphony’, in Hungary. Over 300 children take part in the project, which is held across eight centres, learning instruments and performing together in concerts. In November I invited 27 children and 13 teachers from the programme to come to Salzburg. They gave a wonderful concert and shared a bit about the project and what it means to them in their lives. One young lady shared her story of growing up in segregation in a large Roma family and how she became involved with our centre. She later went on to study Medicine at university in Bucharest, and now returns to volunteer at the centre which made such a difference to her. It was truly fantastic.

What is the significance of the new centre opening in Beregovo?

The centre at Beregovo is a very special work of the Order. The Roma settlement there is the largest I’ve ever seen, with about 6,500 Roma people living there in segregation since the Communist era. Locals often refer to it as ‘the ghetto’, and conditions are appalling. Initially the programme was delivered from a few rooms rented from a public primary school next to the settlement, offering tutoring to the school-age children and kindergarten for the younger ones. After three months, these children were performing so much better that the school’s authorities came to investigate the programme to understand what had sparked such a vast improvement. With the Fund’s support, we have almost finished constructing a new centre to expand the programme to help even more children from the settlement. One of the best things about the new premises is that it includes a huge garden, which can be used as a playground to support the children’s physical and mental wellbeing.

Are there any other developments in the Order’s work with Roma communities?

We will soon begin the construction of a new centre in Pauleasca, a small village in the south of Romania, where the majority of Salzburg’s beggars come from. Having carried out an extensive study of the community there and the conditions they live under, we believe that the approach of the Order’s centres would make a really positive difference there. We are also in the process of building a new centre in Croatia, which will open in a few months. This is especially challenging as the Order does not currently have a relief service there, but we hope that this centre will play a part in its formation.

For these and all our programmes, my hope for every person involved is a comment I heard from a Roma man in Pecs, Hungary. He was appointed by the Order to take charge of cleaning up the settlement where he lived – clearing rubbish, resolving disputes, and so on. When I asked him what had changed in his life as a result of taking part in this programme, he looked at me for a long time, and then replied: “Now I am a citizen”. Can you imagine that?