Faces of the Fund: Interview with Thierry zen Ruffinen 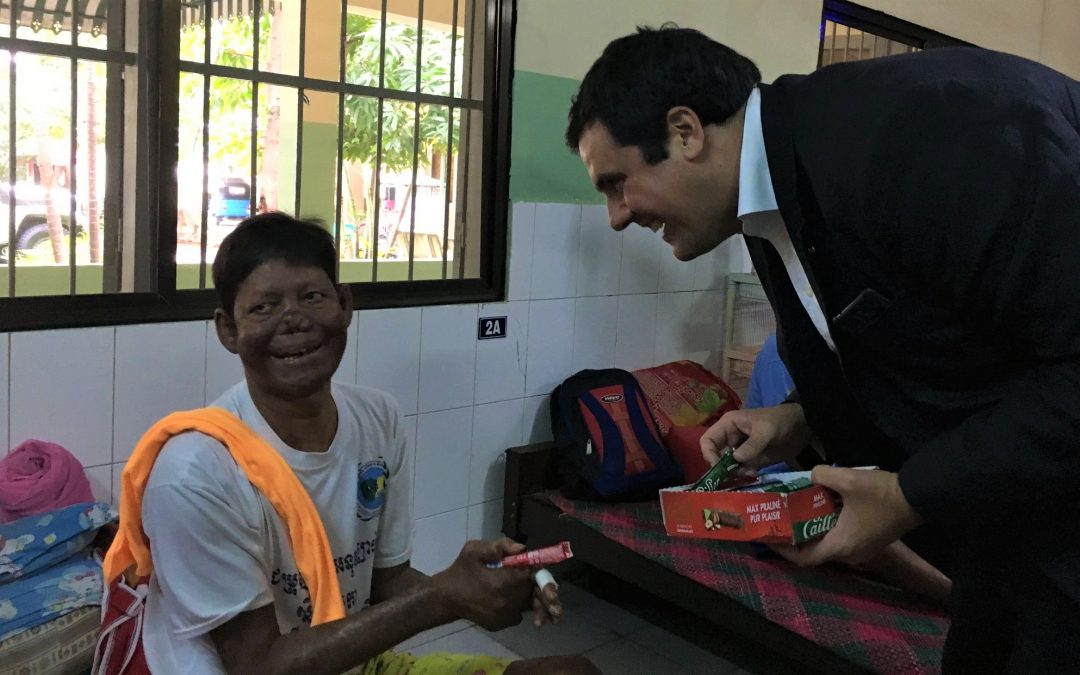 The Order of Malta’s CIOMAL Foundation focuses on reducing the incidence of leprosy and supporting those physically afflicted and socially stigmatised by this ancient disease. We spoke to Thierry zen Ruffinen, President of CIOMAL, about this important work and their plans for the future.

How did you first discover the Order of Malta?

I first became involved with the Order in 1998, when I was a teenager. The parents of a friend of mine, who were members of the Order, invited me to come to Lourdes with them. I had never heard of Lourdes before – all I knew was that there would be lots of other young people there, and that it would be fun! Of course as I attended my training in preparation for the pilgrimage I discovered that it would be pretty hard work too. I must have slept about 20 hours total over six nights my first time in Lourdes! I later joined some friends at one of the Order’s international summer camps, which was a really life-changing experience for me. It was incredible to meet so many people of my own age who shared the same desire to help others, and to see our faith lived out in every action as we cared for disabled guests from all over the world. I’ve now been to ten international summer camps, and each time I leave feeling that I have received so much more than I was able to give.

How did you join the CIOMAL Foundation?

The first step was becoming a member of the Order in Switzerland, which I welcomed as a way to engage more closely with the Order’s work and live out its spirituality more fully in my own life. I was already involved in the Association’s pilgrimages to Lourdes and other activities, but I was interested in finding ways to use my background in the financial industry to the Order’s benefit too. For this reason I joined CIOMAL’s Investment Committee, and eventually took over as President when my predecessor retired.

What are some of the main challenges CIOMAL encounters in your fight against leprosy?

Leprosy is not very difficult to treat – in fact, it is quite easy. The treatment is inexpensive, and the side effects can be managed easily. But similarly to the COVID-19 situation today, there are logistical challenges to consider. Leprosy generally affects poorer communities, which are often found in more remote areas of the countryside, so having to travel widely to test for these cases can add extra complications and lead to a greater rate of disability when diagnosis is delayed. In the poorer countries where leprosy is more prevalent, corruption, poor social security and transport links can also all complicate our efforts. The stigma connected with leprosy also causes significant challenges for combatting the disease – people don’t want to believe that they have been diagnosed with it, especially as many communities in Asia, for example, believe that leprosy is a punishment for behaviour in a past life, and treat it like a curse. Tackling this irrational stigma is a key part of our efforts.

Tell us about CIOMAL’s achievements in its flagship programme in Cambodia.

When CIOMAL started working in Cambodia there were 5,000 new cases of leprosy detected every year. Now, nearly 30 years later, there are only 50. Due in part to CIOMAL’s work and in part to improved quality of life in the country in general, we have seen a drastic reduction in leprosy rates in Cambodia. For this reason, we are currently scaling down our hospital presence, transferring any remaining beds to local authorities and other Order entities active in the country. CIOMAL’s medical contact-tracing campaigns in Cambodia will continue, ensuring that numbers remain low in the country, as will our socio-economic rehabilitation programmes, which help leprosy sufferers and their families rebuild their lives in the face of the long-term disability and stigma that the disease can bring.

What are the other key priority locations for CIOMAL?

We have recently entered a new partnership with Alliance Against Leprosy to combat leprosy in Brazil, where widespread poverty has led to a high rate of the disease. Logistics pose a significant challenge due to the sheer size of the country – some rural locations can take over 30 hours to reach from the capital. Telemedicine, allowing general practitioners appropriately trained by a leprosy specialist to efficiently diagnose and treat the disease remotely in rural areas, will be a key part of the programme, as will the use of 3D printing to produce orthopaedic shoes for those affected. We are exploring ways to deploy the expertise we have gained in Cambodia in other countries where leprosy is endemic, such as Micronesia. We are also involved on the diplomatic side, putting forward statements at the UN to improve inclusion for leprosy sufferers as disabled individuals through the Order’s Permanent Missions to the UN.

How has working with the Fund made a difference to CIOMAL?

As well as the financial support the Fund has raised for our work, our teams appreciate the supportive contact they have with the Fund’s grants team. The Fund’s international perspective makes it a great way to meet the needs of the Order’s work as they arise, connecting donors from your network with programmes which need funding, like fitting together a jigsaw of need and resources. The Fund’s fundraising expertise has also been helpful to me in thinking about developing our own fundraising approach and bringing our story to donors as effectively as we can. The idea of the ‘forgotten people’ is so important – being nameless or unknown is one of the worst things that can happen to somebody, which is why we always seek to care for the whole person in our programmes.

This website uses cookies to improve your experience while you navigate through the website. Out of these, the cookies that are categorized as necessary are stored on your browser as they are essential for the working of basic functionalities of the website. We also use third-party cookies that help us analyze and understand how you use this website. These cookies will be stored in your browser only with your consent. You also have the option to opt-out of these cookies. But opting out of some of these cookies may affect your browsing experience.
Necessary Always Enabled

Any cookies that may not be particularly necessary for the website to function and is used specifically to collect user personal data via analytics, ads, other embedded contents are termed as non-necessary cookies. It is mandatory to procure user consent prior to running these cookies on your website.