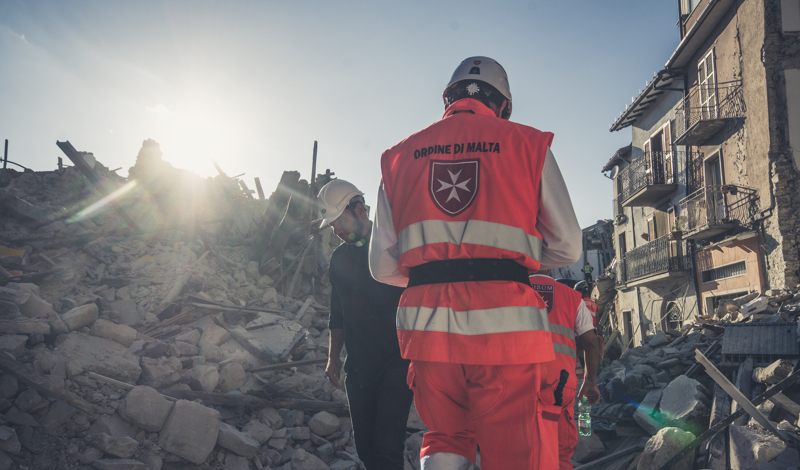 A violent earthquake struck central Italy on 24th August, killing almost 300 people and leaving more than 2,000 homeless. The Order of Malta’s Italian Relief Corps was present from the early hours of the 25th August to provide relief during the emergency. In the tradition of the Order to stay after the spotlight has faded, they are still present assisting the devastated local communities.
“We are carrying out an extensive follow-up to discover the needs of the people in Amatrice and its 68 outlying areas damaged by the quake” explains Mauro Casinghini, national director of the Order’s Italian Relief Corps.

The Order of Malta is based at Amatrice Sports Stadium. Immediately after the earthquake, the stadium was turned into a storage centre for basic supplies, an infirmary and a tent city for the homeless. It is here that the Relief Corps has handed out over 300 kg of food and personal hygiene products, and offered psychological assistance to dozens of families.

“We will continue to help the people in the areas devastated by this earthquake,” said Dominique de La Rochefoucauld-Montbel, the Order’s Grand Hospitaller. Days after the earthquake struck the Grand Hospitaller launched an appeal for funds to assist the populations so badly affected by the tragedy.

The Global Fund for Forgotten People is assisting. All the money raised goes directly to the earthquake relief effort of the Order’s Italian Relief Corps. Our thanks to all of those who have generously responded.