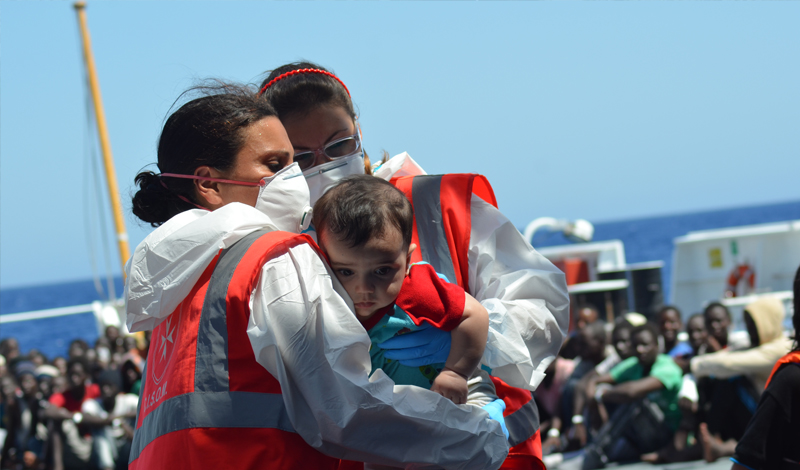 Since 2012, the Global Fund for Forgotten People has awarded four grants to the Order of Malta’s Italian Relief Corps (CISOM) for their continued work with refugees and migrants.

The Order is active around the island of Lampedusa, providing round the clock first aid to migrants attempting to cross the sea in unsuitable and overcrowded boats. Over 55,000 people have been rescued at sea and treated by our medical teams.

In December 2015, due to the dramatic influx of migrants and refugees trying to reach the Greek islands from the Turkish coasts, the Order launched an Aegean Search and Rescue Operation. During the first three months of operation, the doctors and nurses of our Italian Relief Corps saved 2,000 people.

“The Aegean Sea is worse than the Mediterranean. The water is freezing and hides needle-sharp rocks that puncture rubber dinghies”, says Dr. Giada Bellanca of the Order of Malta.

Equipped with two high-speed vessels, the responder boat patrols the sea around the islands separating Greece from Turkey, the new journey of hope for thousands of Syrians fleeing from the war. “There is a very high risk of hypothermia in these waters, especially for a child,” explains Jean de dieu Bihizi, Order of Malta nurse.

The humanitarian emergency at Lampedusa and in the Mediterranean Sea is among the most constant and massive relief efforts of recent years. The Italian Relief Corps health teams continue to provide medical aid to thousands of migrants who too often show signs of suffering and are highly debilitated by a journey that goes far beyond a crossing on a boat off the coast of Sicily.