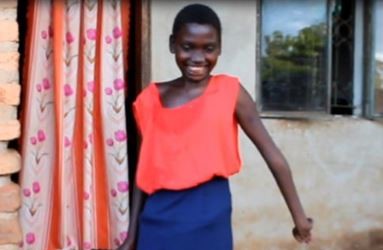 Faith is a 12 year old girl from Uganda who suffers from sickle cell disease.

Due to the severity of her condition, Faith suffered from multiple strokes and was paralysed. She was being cared for by her mother. She was not even able to go to the bathroom on her own and had to be carried everywhere. The family had no support and their income was too low to afford the medication essential to treating Faith’s condition.

Sickle cell disease is a common genetic disease. It is not curable but it is possible to prevent or reduce the symptoms through treatment and medication. However, most Ugandans are not able to afford the medication however. Without it, many children die before reaching their 5th birthday. Due to a lack of understanding about the disease, those suffering from it are also stigmatised in society, with children and entire families often abandoned and marginalised.

With support from the Fund, Malteser International runs outreach clinics in Uganda, increasing access to care and support services in Wakiso and Kalangala Districts. They also spread awareness of the disease so communities have a better understanding of the disease and sufferers, particularly children, are treated as early as possible.

Following a year of care and treatment, Faith is now suffering from far fewer strokes. She is able to walk again, without support, and is able to enjoy life with her family. Faith is just one of the hundreds of people whose lives have been touched by the work of the Order in Uganda.