Volunteering in Romania with the Order of Malta 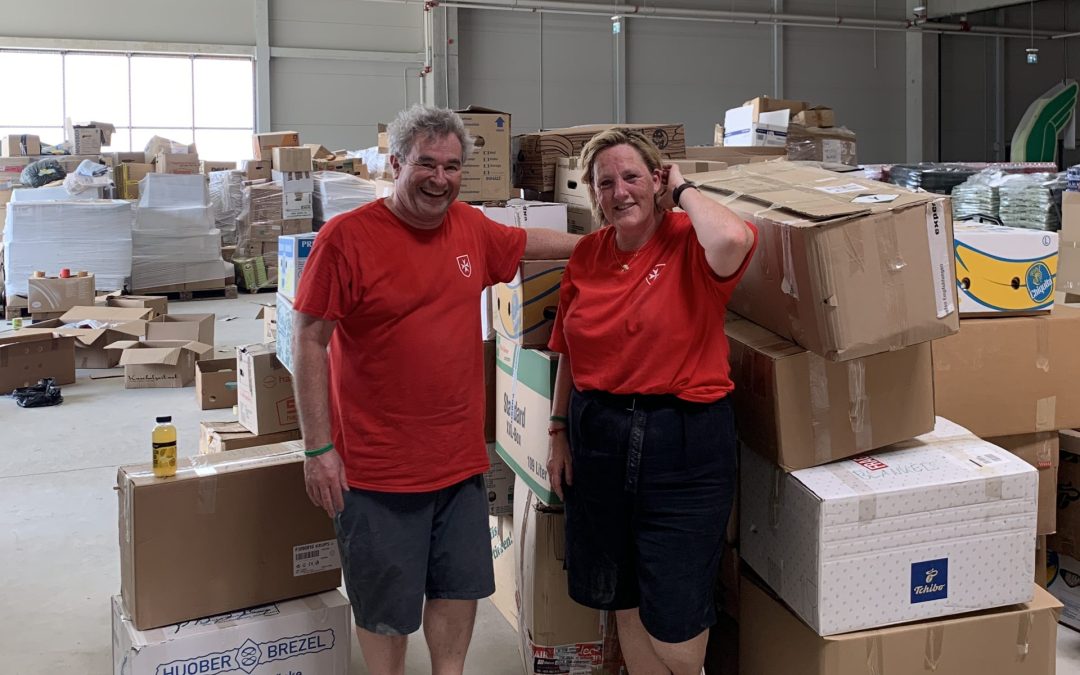 Jonathan Rawlings and I first became friends volunteering with the OMV in Lourdes in 1983.  In May, we both decided that we would like to help the Order of Malta’s international response to the Ukraine crisis and contacted the Global Fund for Forgotten People.  After a very useful zoom call with one of the team, we signed up on the Order of Malta Vision 2050 website and started making preparations to join the relief work on the Romanian / Ukrainian border in early July.

We were attached to the Satu Mare team of the Romanian Relief Service, which is made up of 30 permanent staff and approximately 100 regular volunteers that support various different projects dealing with the elderly, the homeless, the Roma community, disadvantaged children and now the Ukrainian refugees.  The Satu Mare team has been in operation since 1997 and in 2021 supported more than 8,000 people over 24 different active projects.

The first few days we joined a few other volunteers at a warehouse in Satu Mare.  We sorted donations – mainly clothes, toiletries, hygiene products, nappies, bedding and non-perishable food.  We made up enough boxes to fill 51 pallets – which is enough to fill about 1.5 of the largest 20 tonne trucks that travel into Ukraine.

After we had helped to sort the donations, the Romanian team asked if we would like to travel with some of those supplies to the warehouse in Beregovo, just over the border into Ukraine.  Beregovo is in the far south-west corner of Ukraine, approximately 830km from Kyiv and 1300 km from the front line.  The team fully explained the situation to us and in no way pressured us to cross the border.  Jonathan and I decided to join the team for the delivery.  The Order of Malta team in Beregovo have rented an enormous warehouse of 5,500 square metres, and are currently keen to try to purchase it for their future activities.  Since the start of the war, the warehouse has received 279 truckloads of donations amounting to more than 700 tonnes of supplies.  Support from one of the Fund’s British donors helps the team run this logistics hub.  The small team has already distributed just over half of this enormous amount of aid, either to Ukrainian refugee families who have fled from the East of Ukraine and are now living in the areas surrounding Beregovo, or to places further East such as Kharkiv and Zaporizhzhia, via road and rail.  Whilst in Beregovo, we also visited another project of the Ukrainian Relief Service that is supported by the Global Fund for Forgotten People and saw the incredible work they are doing with disabled children.  These projects are made more difficult by the war, but the team is still managing to support the vulnerable children.

Returning from Ukraine, we helped at the Ukrainian Romanian border for two days over the weekend.  Working from a tent on the side of the road, we supported the people crossing the border.  There are fewer refugees crossing the border here than was the case in the weeks immediately following the start of the war, but there was still the occasional coach as well as some individual travellers.  The people we assisted included lorry drivers who had been in extremely long queues, and women and children, amongst others, who were fleeing Ukraine needing water, food and children’s toiletries.  Their journeys had often been extremely long but a number of them were willing to speak about their experiences before they continued into Romania, some bound for destinations such as Albania, Germany and Slovakia.  It was a humbling experience to hear first-hand the stories of where they had come from, and to be shown photographs of the places and people they had left behind.  A number of the travellers were also quite emotional that volunteers had travelled from England to support them.  Many of the refugees had reasonably good English but otherwise we communicated with the aid of Google Translate.

On our last day in Romania, we visited one of the Romanian Relief Service’s projects for Roma communities where the Satu Mare team have been working for many years and which the Fund has supported extensively.  The tower block, which is situated in one of the poorest neighbourhoods in the city, houses about 600 Roma people in extreme poverty with up to fifty people living in one flat.  Their housing conditions are terrible, bug-infestation being one of the biggest problems, and many of the people suffered greatly during the pandemic.  The Satu Mare team have created a “Presence Point” next door to the tower block with showers, washing machines, food cupboard and a teaching room.  They support the young children with educational projects, and teach them basic hygiene needs such as showing them how to clean their teeth.  In addition, they encourage families to do their laundry and to use the washing facilities at the centre. They also provide food donations, and household and hygiene products for the families.  It has taken the team many years to build up the requisite level of trust with the Roma community and, although not all of the Roma people living in the flats fully engage with them, things are changing and an increasingly significant number of people regularly use the “Presence Point.”  The Satu Mare team are delighted because one of the young girls that they have been supporting over the last few years, was going to complete school to 18 years old.  This would be the first child from that community ever to achieve this as early school drop out is a common problem, and one of the aims of the programme is to reduce it.

The team in Satu Mare were inspirational and they work tirelessly to support the vulnerable and isolated.  They showed us great kindness and generosity and we were even invited to a birthday party of one of the volunteers.  It was a complete privilege to work with the Romanian Relief Service, and an amazing experience for both of us.

For more information on supporting any of this work in Romania or the Ukraine, please contact [email protected]